The Project comprises the comprehensive refurbishment of holes 10 to 18 of Real Club de Golf Las Brisas. This Project continues the complete renewal and redesign process of the 18 holes that commenced in 2012 with the first nine holes.
The refurbishments of the course started with the modification of the holes the owner commissioned Kyle Phillips Golf Course Design to do, whose redesign aims at improving the competitiveness of the course and adapt it to the present playing condition. The course modification implies the complete renovation of all course elements (greens, tees, fairways, rough, etc.), and of all the services and the infrastructure (drainage, electricity, paths, bridges, etc.), which deteriorated over the years. 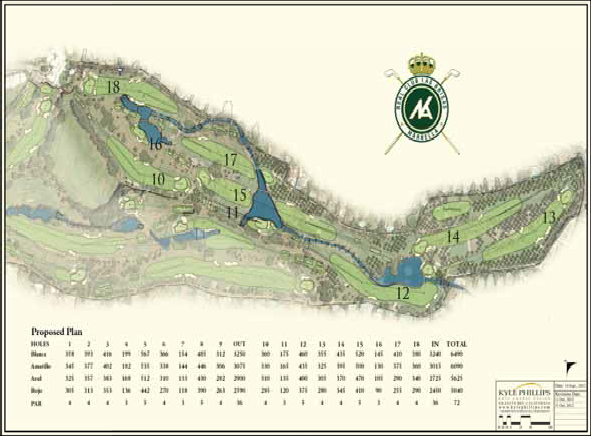 2.1.     GENERAL.
In November we suffered continued and torrential rainfall, which slowed down a number of works foreseen for this month
Apart from advancing the works started in the previous months, i.e. stripping, earth moving and shaping, lake 18 and transplanting; some other tasks such as demolition and stonewall construction were started.

2.2.     RAIN.
As already informed, November proved particularly wet in both number of days and intensity, especially during its last week. The total rainfall was 224 mm, which complicated the works and stopped the advance of the project with a total of 10 working days lost. Heavy torrential rains took place on 24th and 25th November being the total rainfall 74 and 55 mm respectively. Although this rain could have caused some important damage, the preparatory works comprising canals and channelling proved effective and minimized the damages. See the rainfall registration chart for November below. 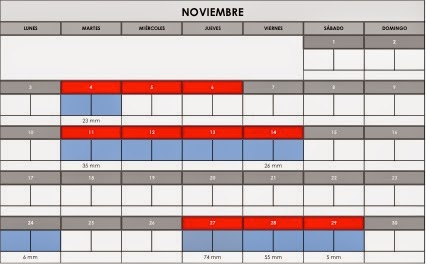 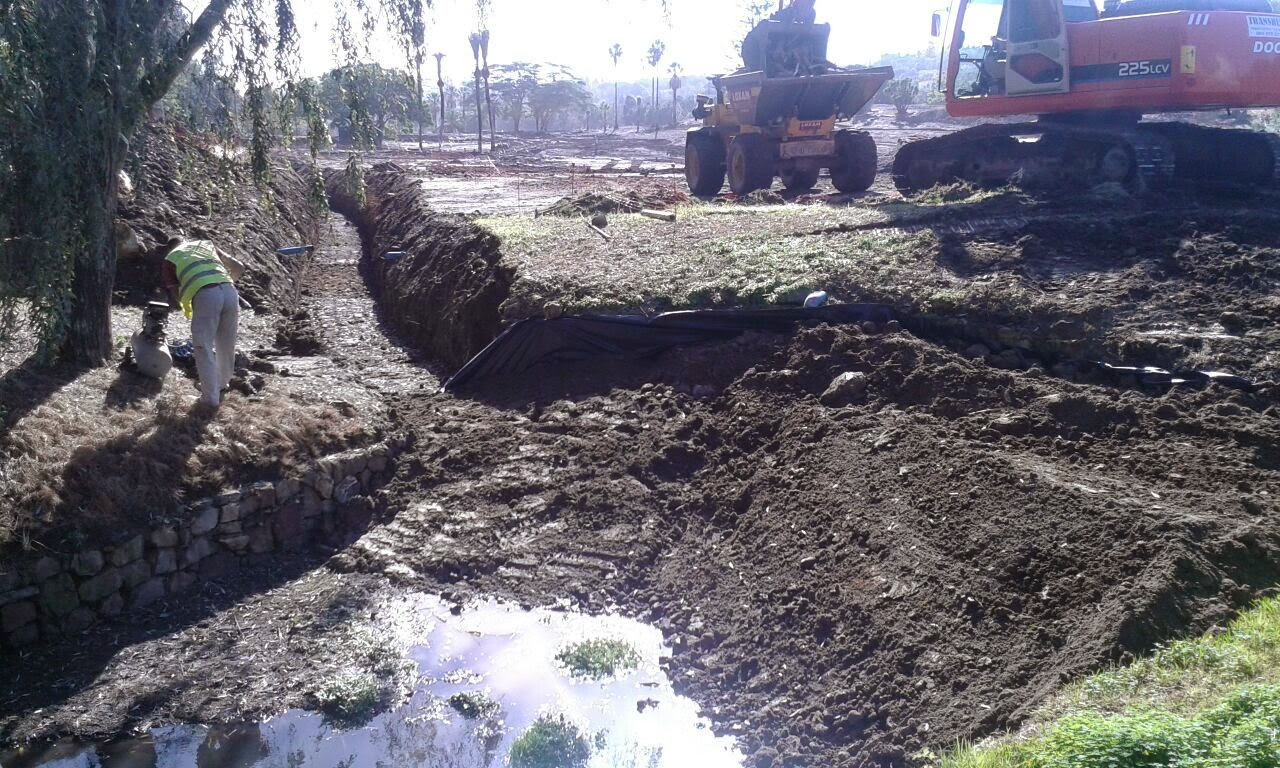 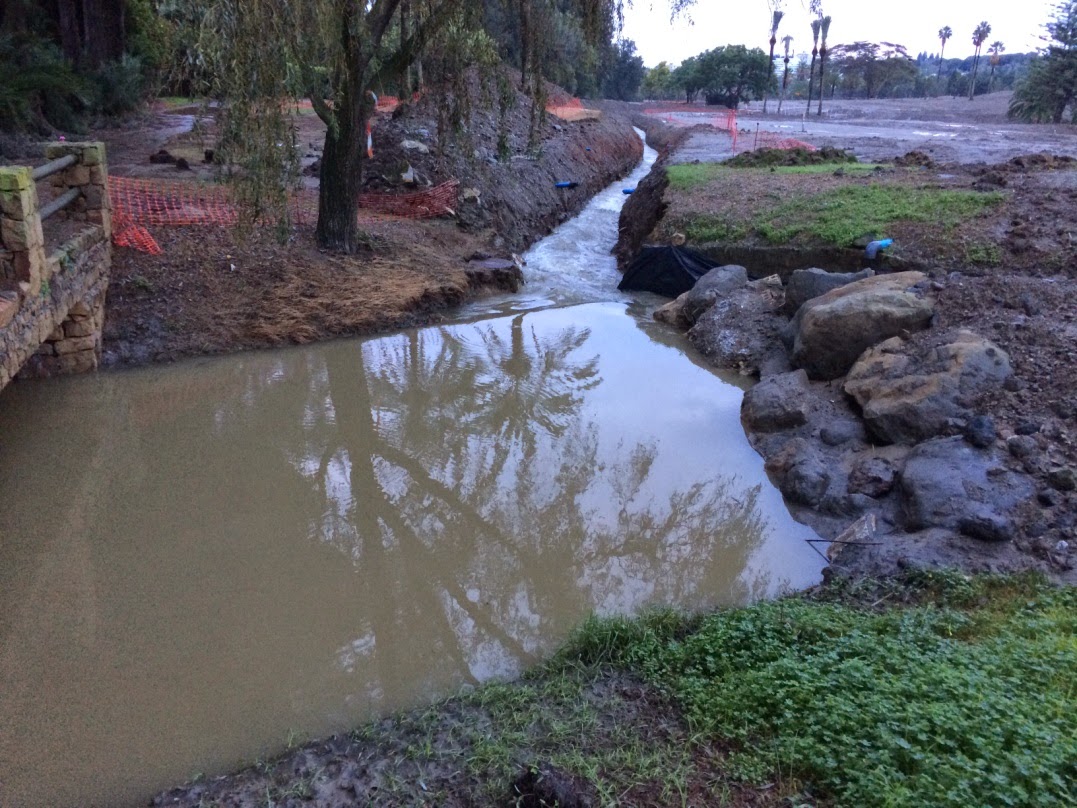 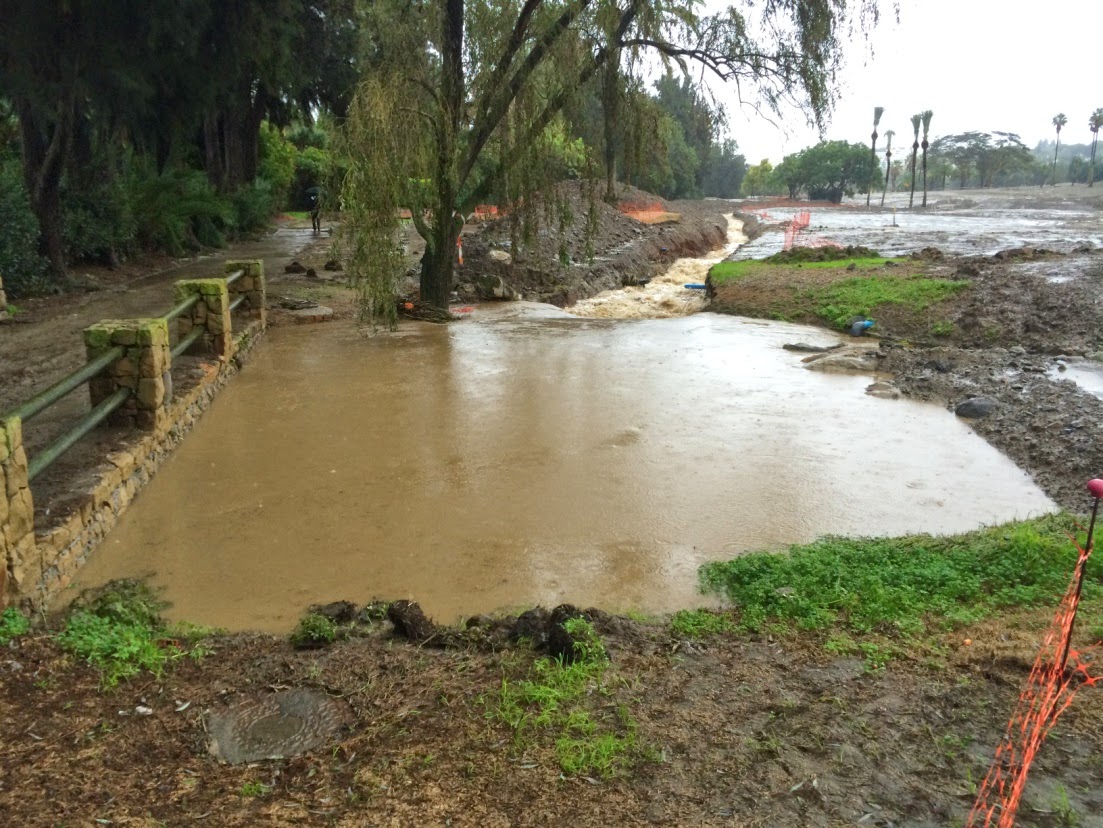 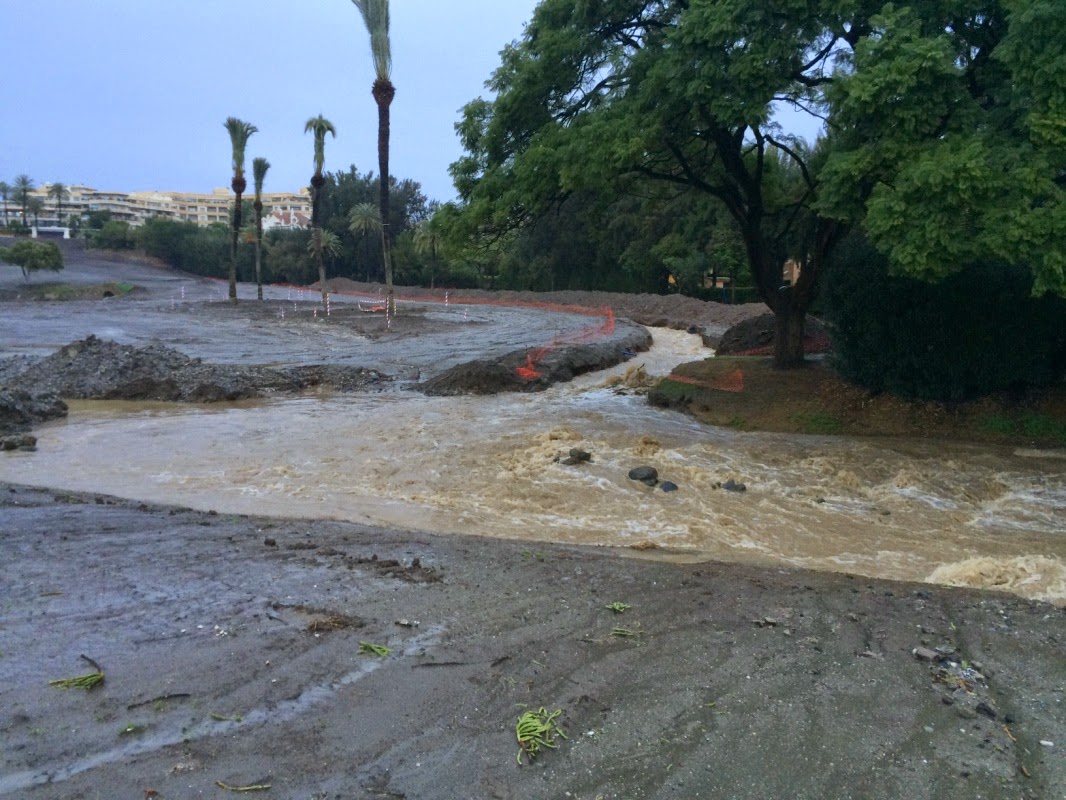 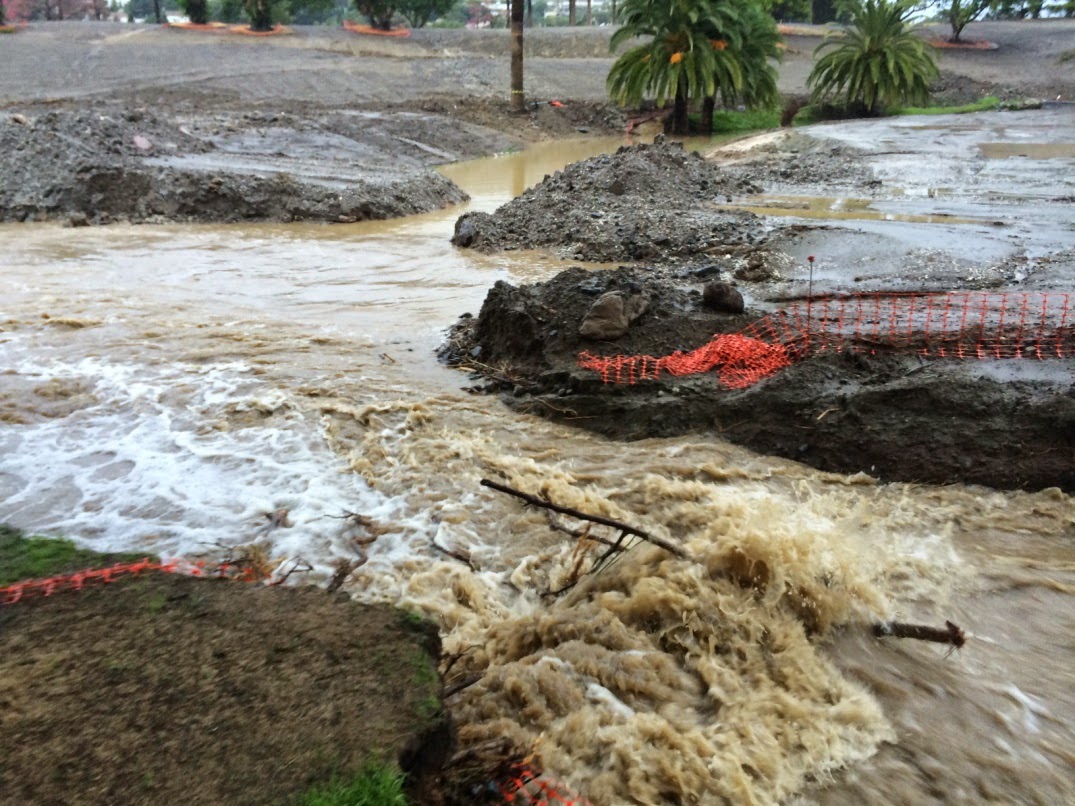 Hole 18 and lake full with water coming from hole 10: 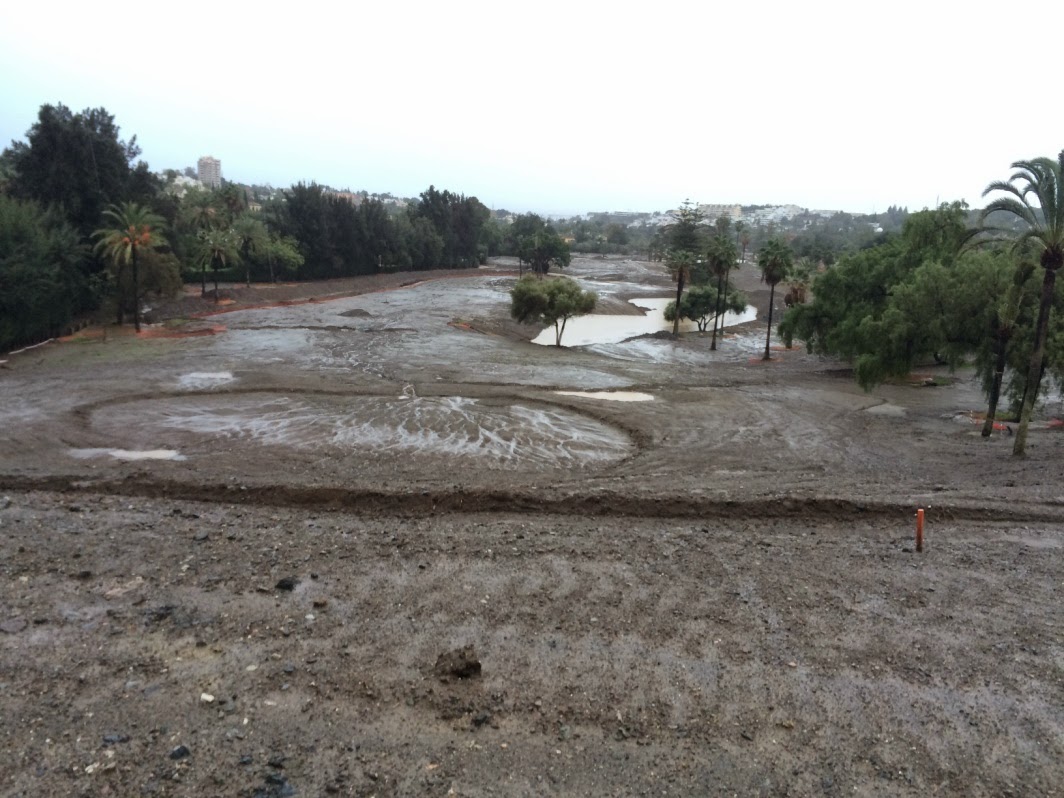 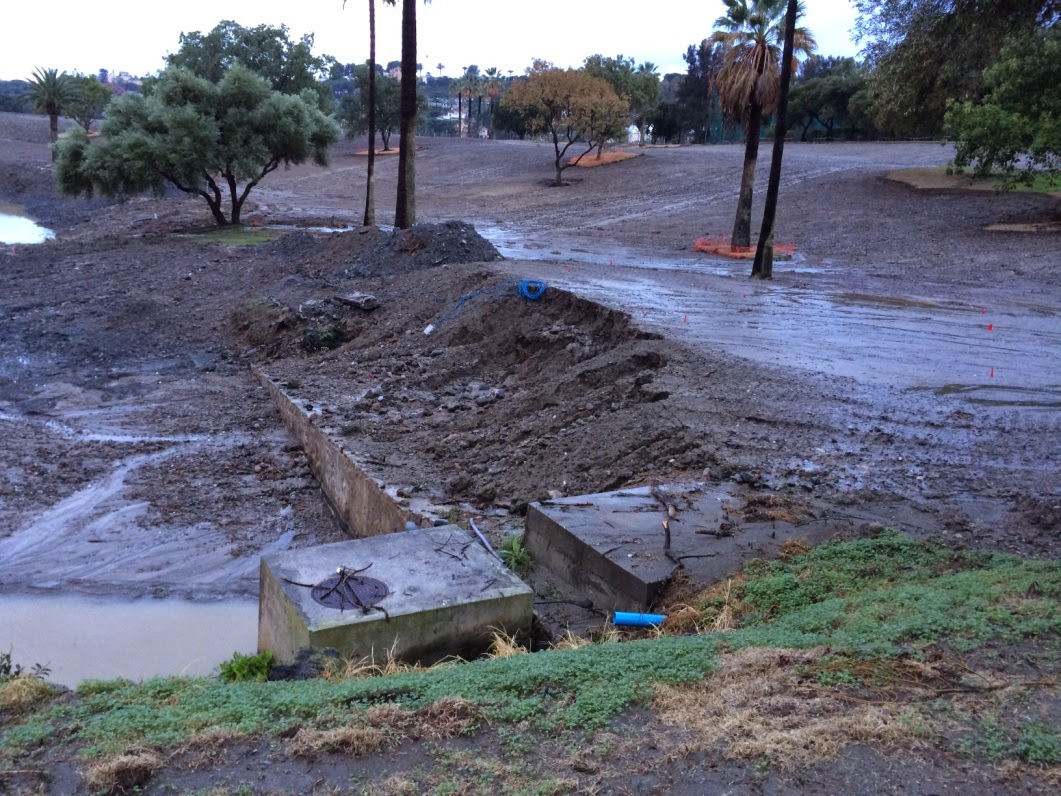 2.3.     STRIPPING.
By stripping the first 10 cm of soil we intend to obtain the cleanest possible surface for the new course, especially free of seeds and reproductive elements of kikuyu, because of their high presence on the site and the problems caused before and at present at holes 1 to 9.
By the 1st of November all but holes 11, 12 and 15 were almost completely cleared, representing 70% of the total surface foreseen, 30% more than planned for that date.

2.4.     EARTH MOVING.
The rain affected earth moving very much, as lorries were unable to circulate. These works have still to be carried out in many areas such as holes 12, 13 and 14, some localized locations such as the extension of fairway 15 to the lake and the slope completion of lake 18.

2.5.     DEMOLITION.
All greens, tees and bunkers were demolished by the previous certification date. Some buggy-path areas were dismantled being this chapter 80% completed, doubling the advance foreseen for this date. The main outstanding demolition works comprise the chiringuito, the bridge of lake 15, the toilets and the bridge of the tees of hole 12, which will be finally demolished following the recommendation of Kyle Phillips. At the time of writing this report the demolition of all these elements was started and their certification is foreseen for the end of December. The toilets next to hole 16 being used by the contractor will be done at a later date, as initially agreed. 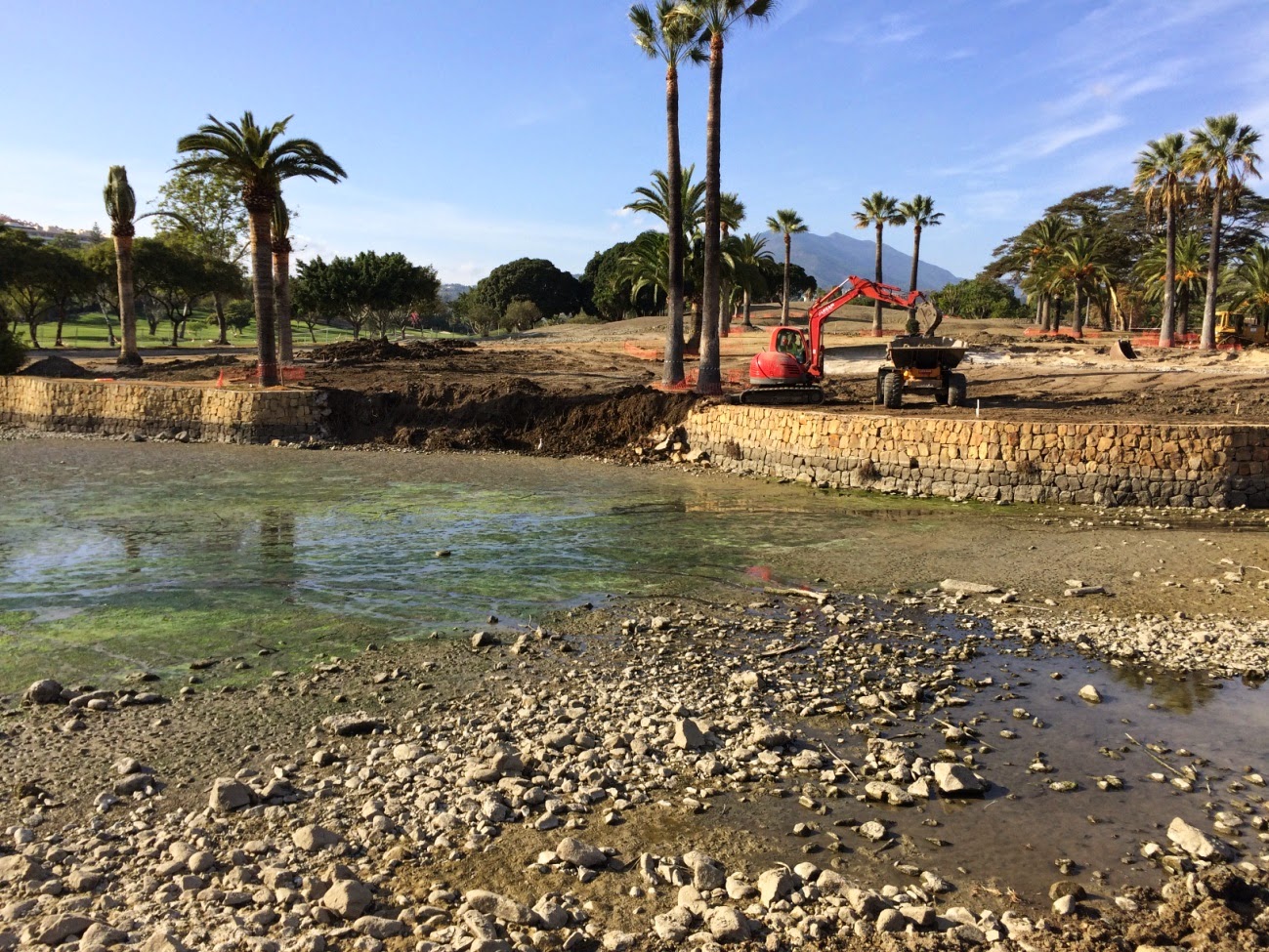 2.6.     DRAINAGE REMOVAL.
The removal of old damaged drainage elements started this month. The working condition of the complex pipe network structure installed during the last 40 years is limited under the refurbishment work. Many sections were cut, blocked and broken by earth moving tasks, by drainage or irrigation installation or simply by the machinery passing along, something we are certain of in the light of the previous refurbishment, with many old drainage elements scattered around the course and pouring water out the surface, as their continuity is lost.
In order to locate the most part of the existing drainage elements, last summer we delimited all visible or traceable elements topographically by means of guides and locators, and a map was issued. In order to avoid wet areas after the works, we are dismantling all located drainage element and those found during the works. It is important to note that, despite the effort made, some elements may not be removed, as most of them are untraceable and will not be detected during the works, reappearing inevitably in later years in need of repair. 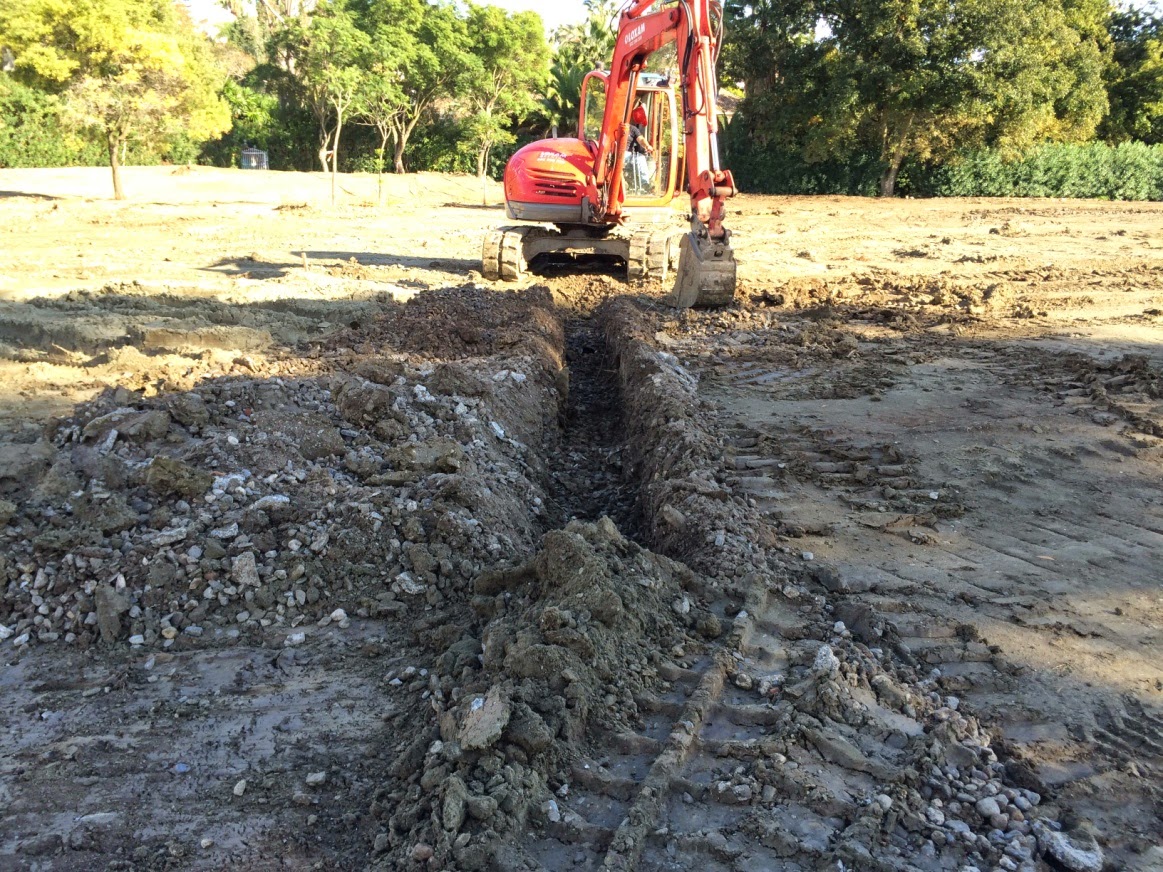 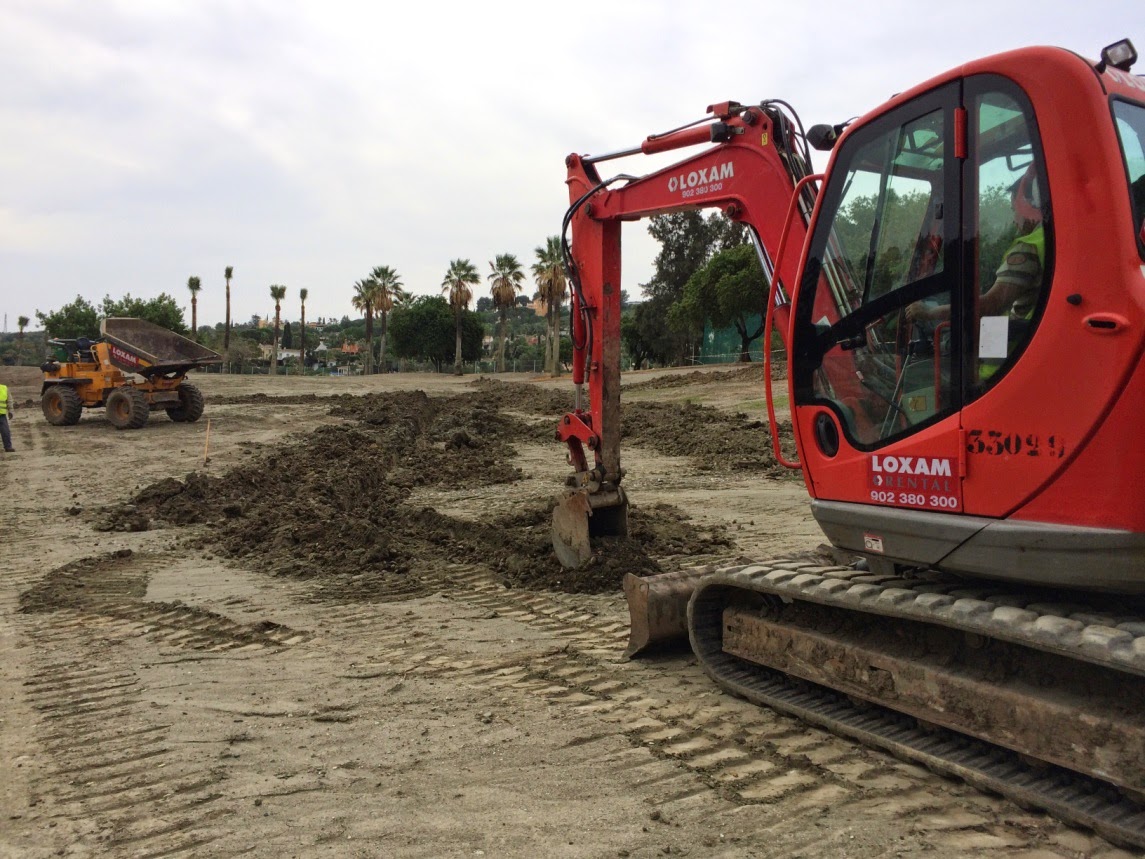 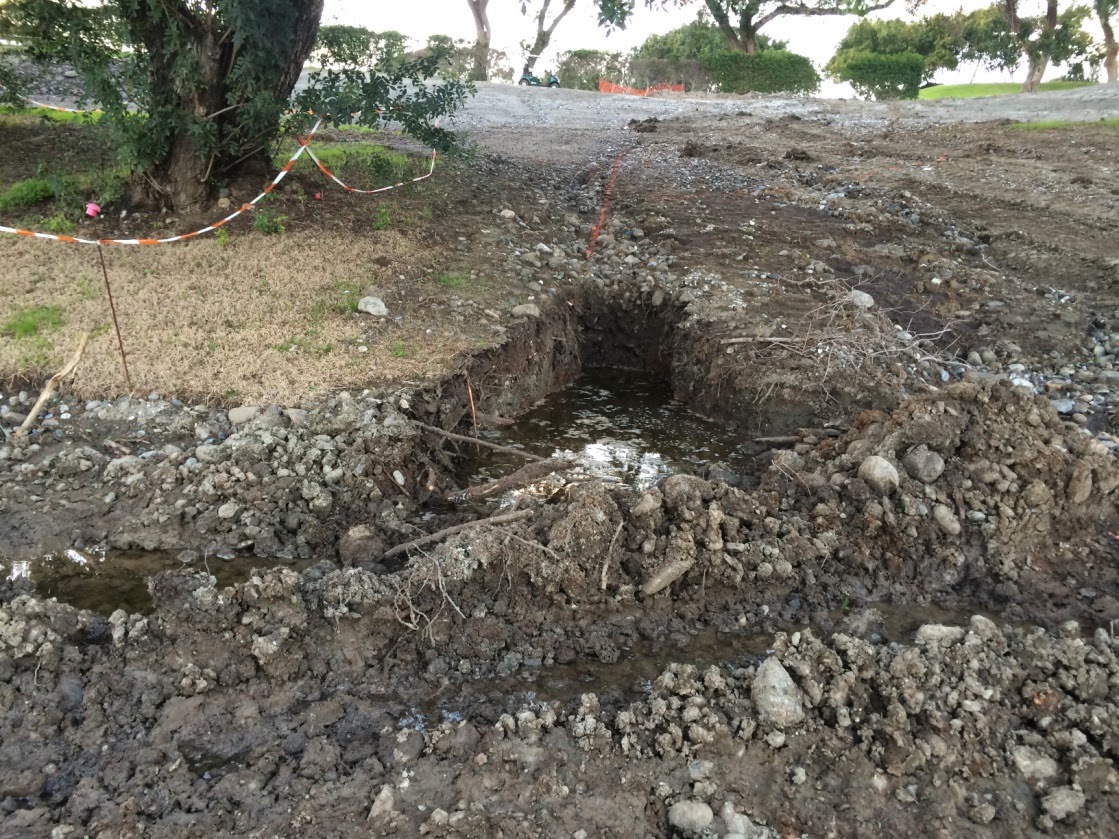 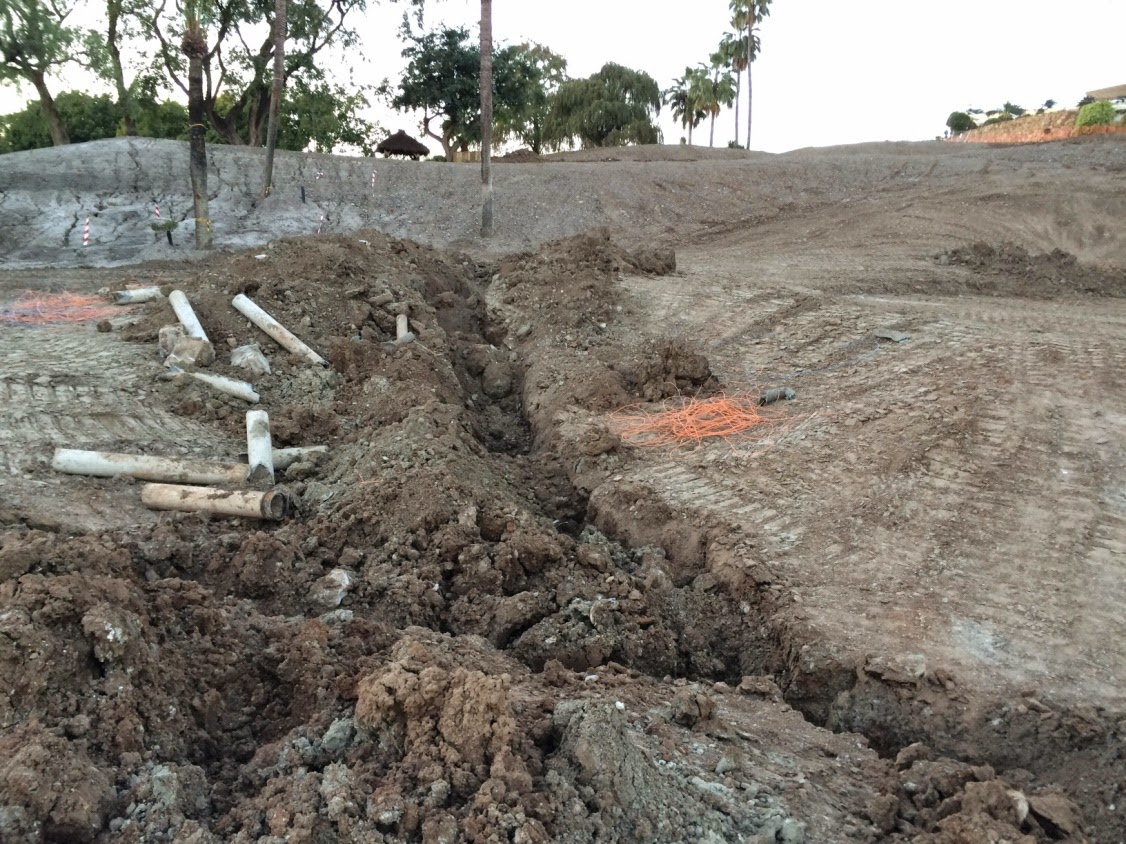 2.7.     LAKE 16-18.
Most excavation works on lake 16-18 were practically finished last month. The initial approach was to maintain the ditch excavated at the lateral side of green 16 to alter the course of water when the works were started and keep the bottom dry in order to build the bridge under the safest possible conditions. As the rainy season progressed and in anticipation of the rains on the 27th and 28th, it was decided to alter the course of water trough the fairway 18 by blocking the entrance to the lake and opening a big ditch, as this solution was considered safer than the previous one, and then serve as a bypass for the lake. Consequently, the lake will be kept dry on a permanent basis and the slopes of hole 16 will be finished without waiting for the bridge to be finished. The lake will be done upon completion of the bridge works. 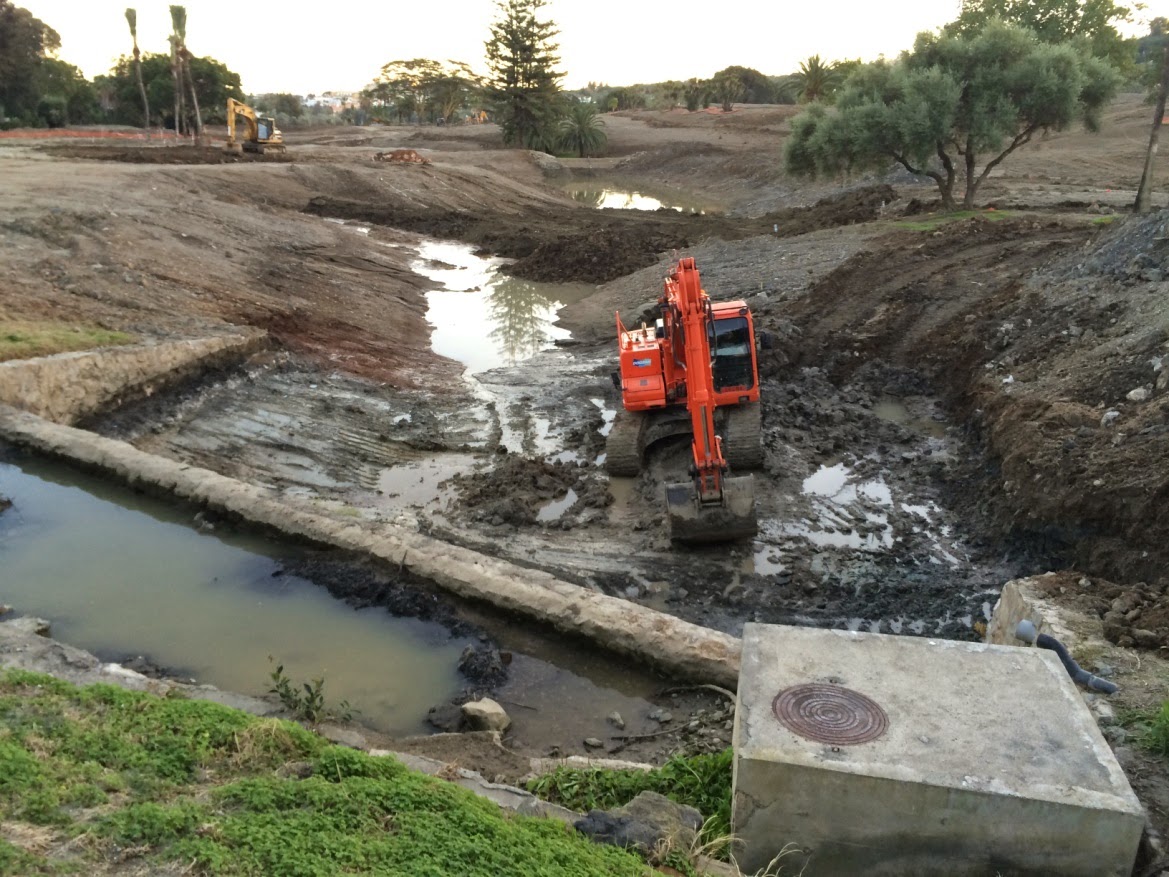 2.8.     WALLS.
The construction of the new walls and the extension of the existing ones started at the tees of hole 12 before the scheduled date, as it was foreseen for mid December. 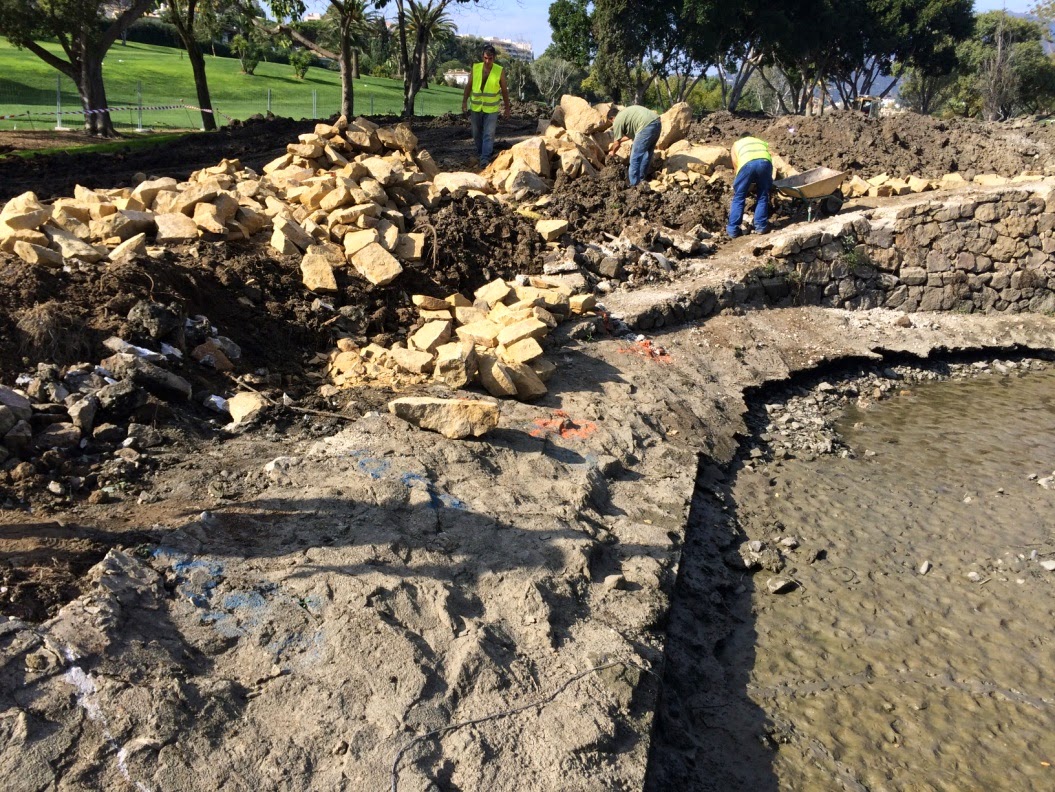 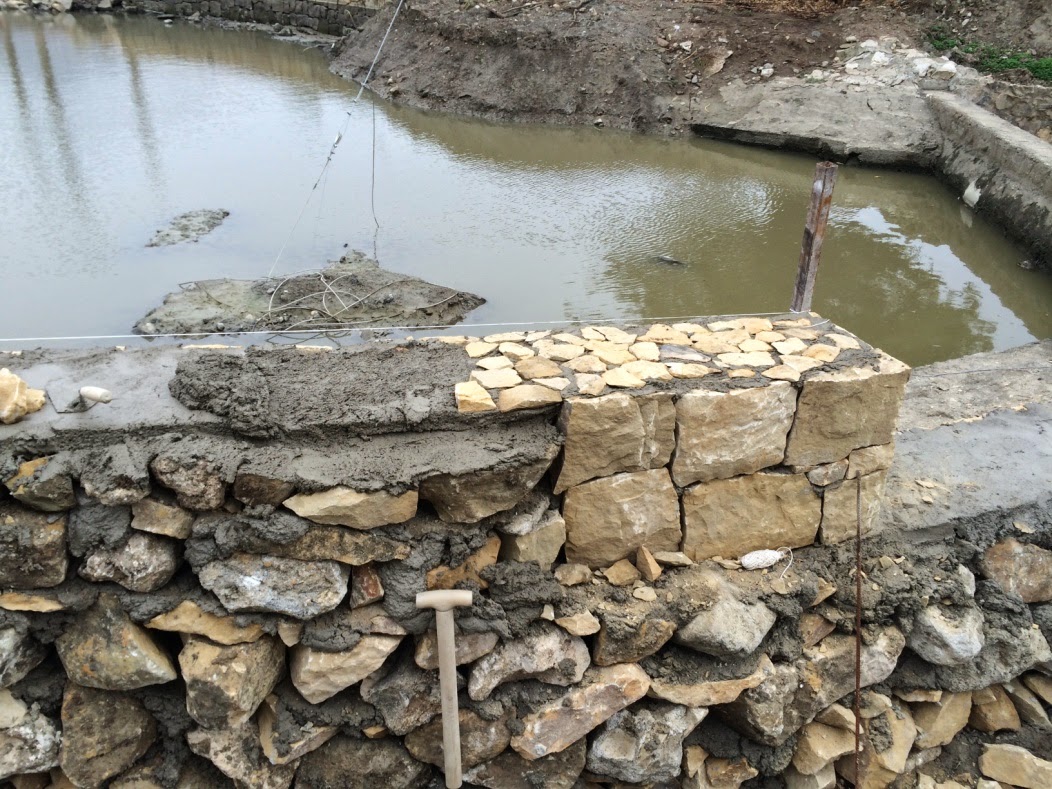 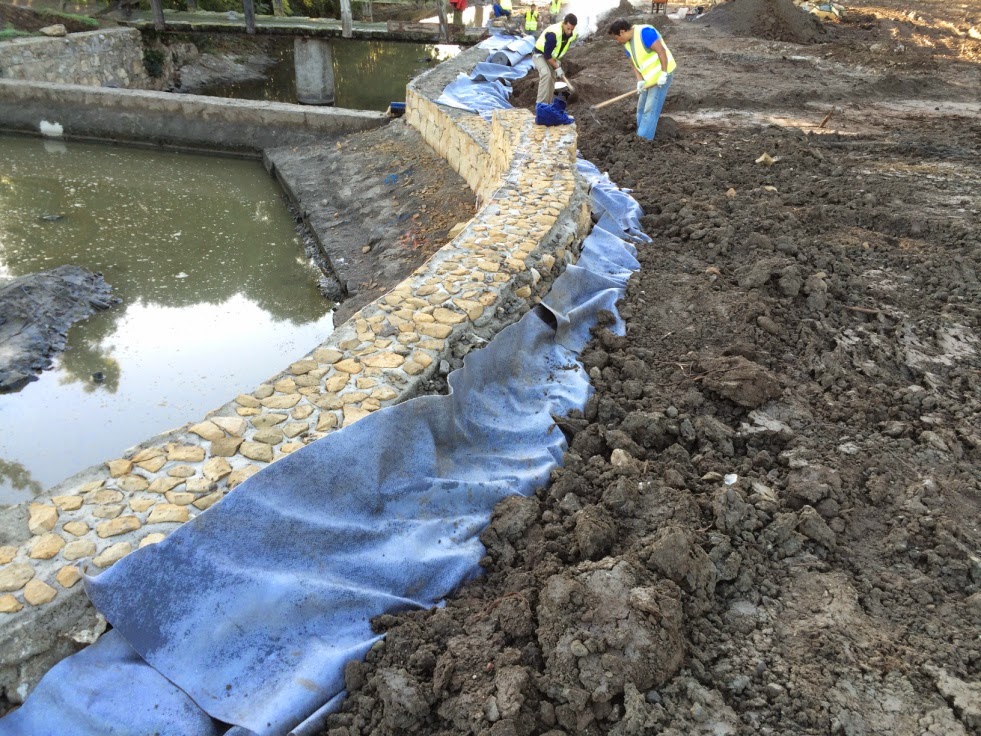 2.9.     SHAPING.
The shaper lost almost one third of the working days this month because of the raining season. Kyle Phillips modified the shaping of holes 10, 18 and 15, tees of holes 11 and 16 in their last visit, being these works already finished together with the elements shaped this month, i.e., professional tees of hole 17 and green complex of holes 17 and 11. 50% of the green complex and 30% of the tees are the areas shaped at present. Shaping works are needed after the earth moving already made by Garden Golf at fairways and rough and also at the lower spots where the drains will be installed. At present, this work is only finished at hole 10. Then the total surface of holes 16, 17, 11 and 15 will be shaped with the exception of the areas affected by the works and material collection for bridges, which will be postponed until their completion.
There are some pictures below showing earth moving and shaping tasks carried out at the areas adanced in November. 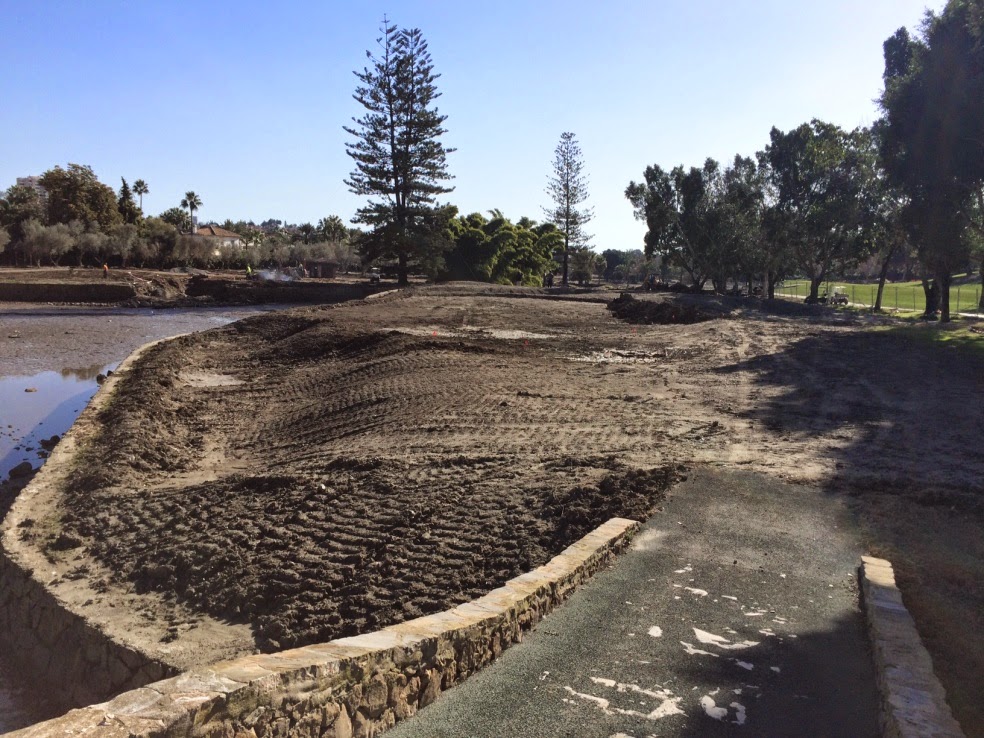 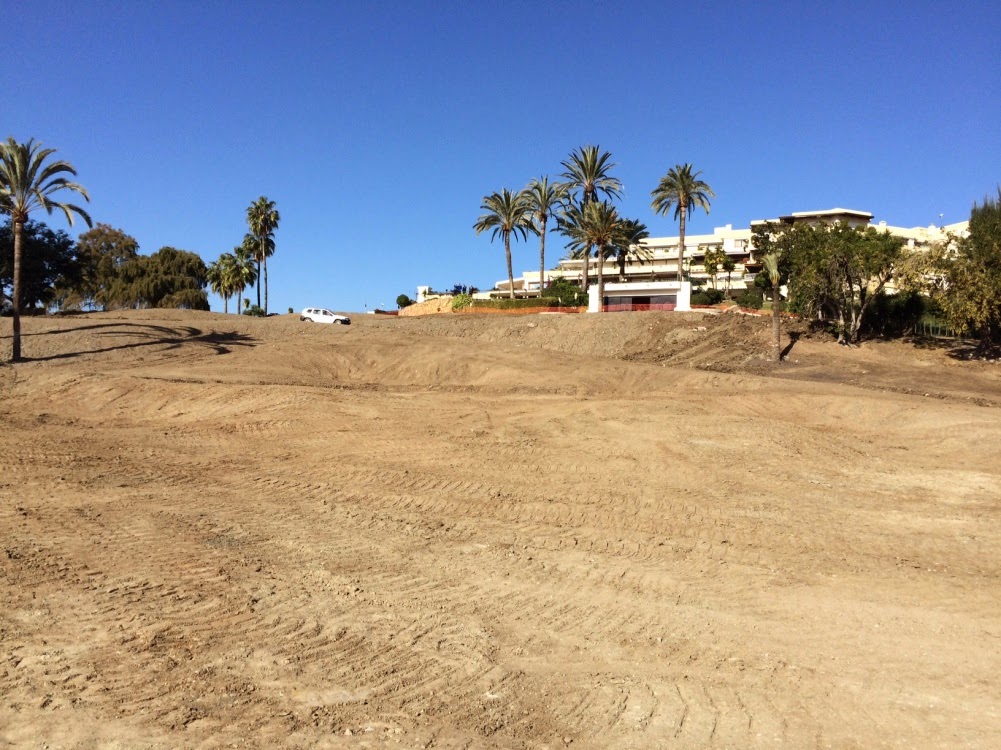 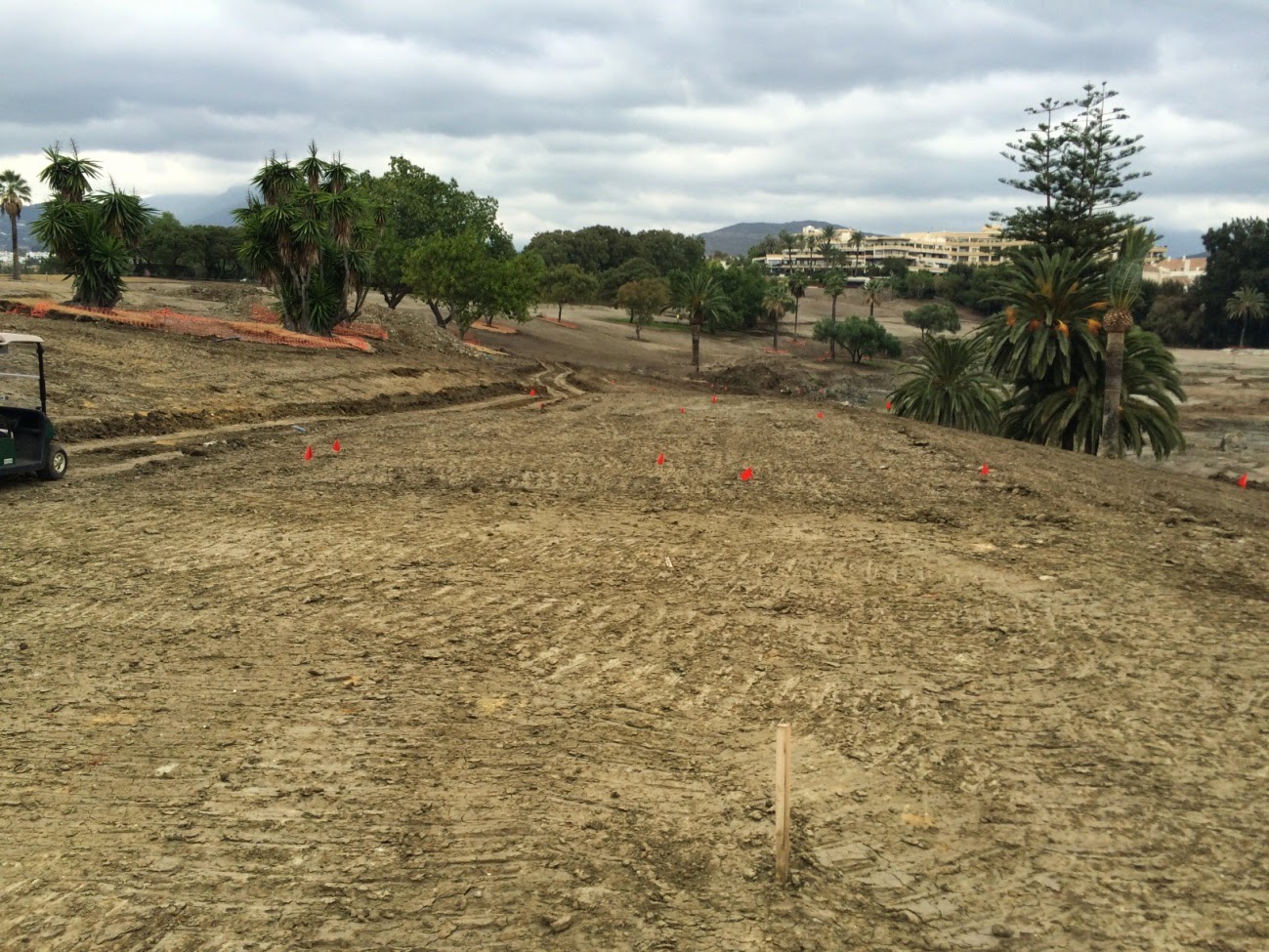 2.10.   LANDSCAPING.
The replanting tasks continued in November. We replanted 50% of olive trees and all but 4 palm trees that will be planted next to the tee of hole 10. Many trees needing relocation because of earth moving were also replanted: a few Magnolios, 2 Eritrinas, one big Tipuana next to the new 17 hole, and 2 big Acebuches. The three latter would have required Treeplatform technique (used with the Araucarias), but it was not agreed before starting the works due to economic reasons. Ordinary machinery was to be applied instead, which reduces the chances of success. The transplanting took place this month but using an unsuitable method for their size damaged the trees and the result is likely to be inconsistent. 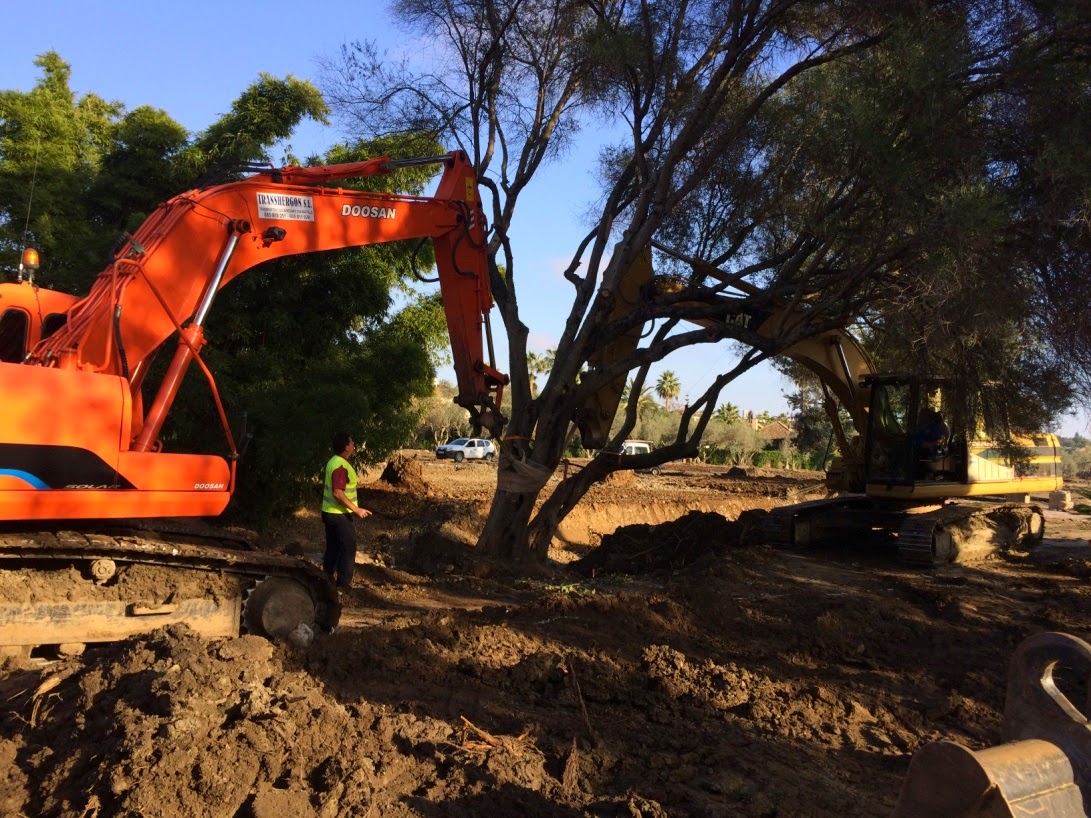 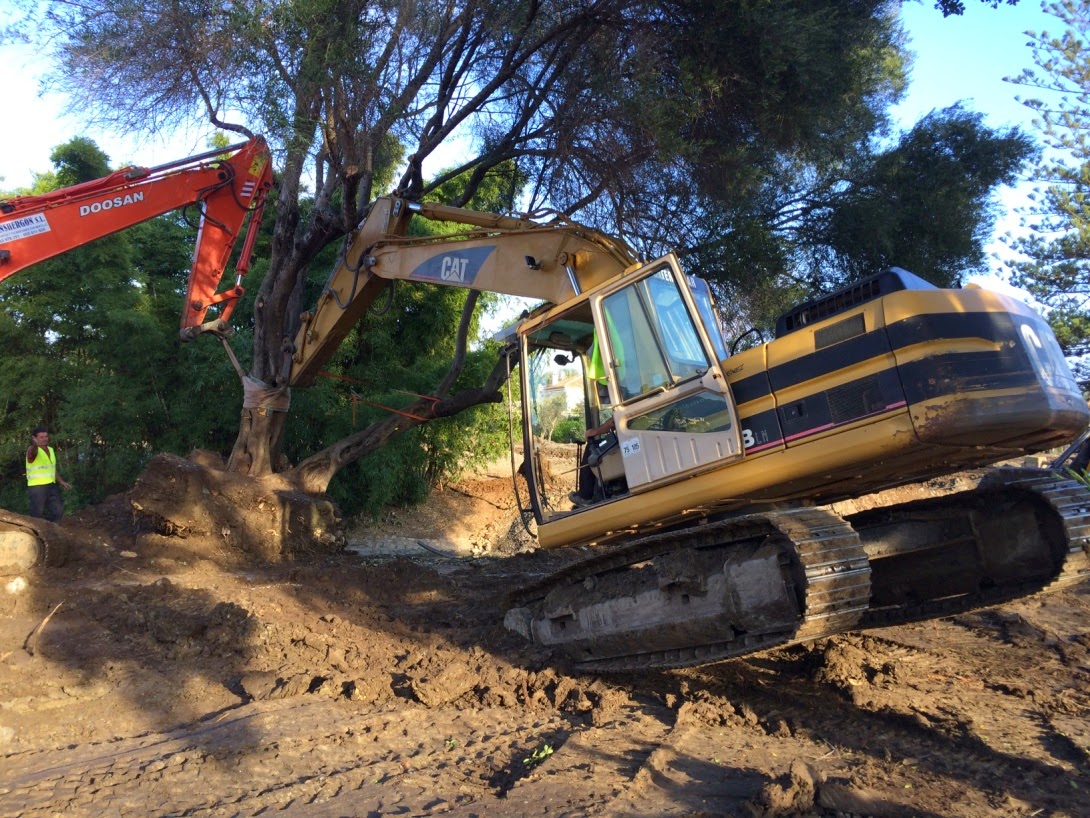 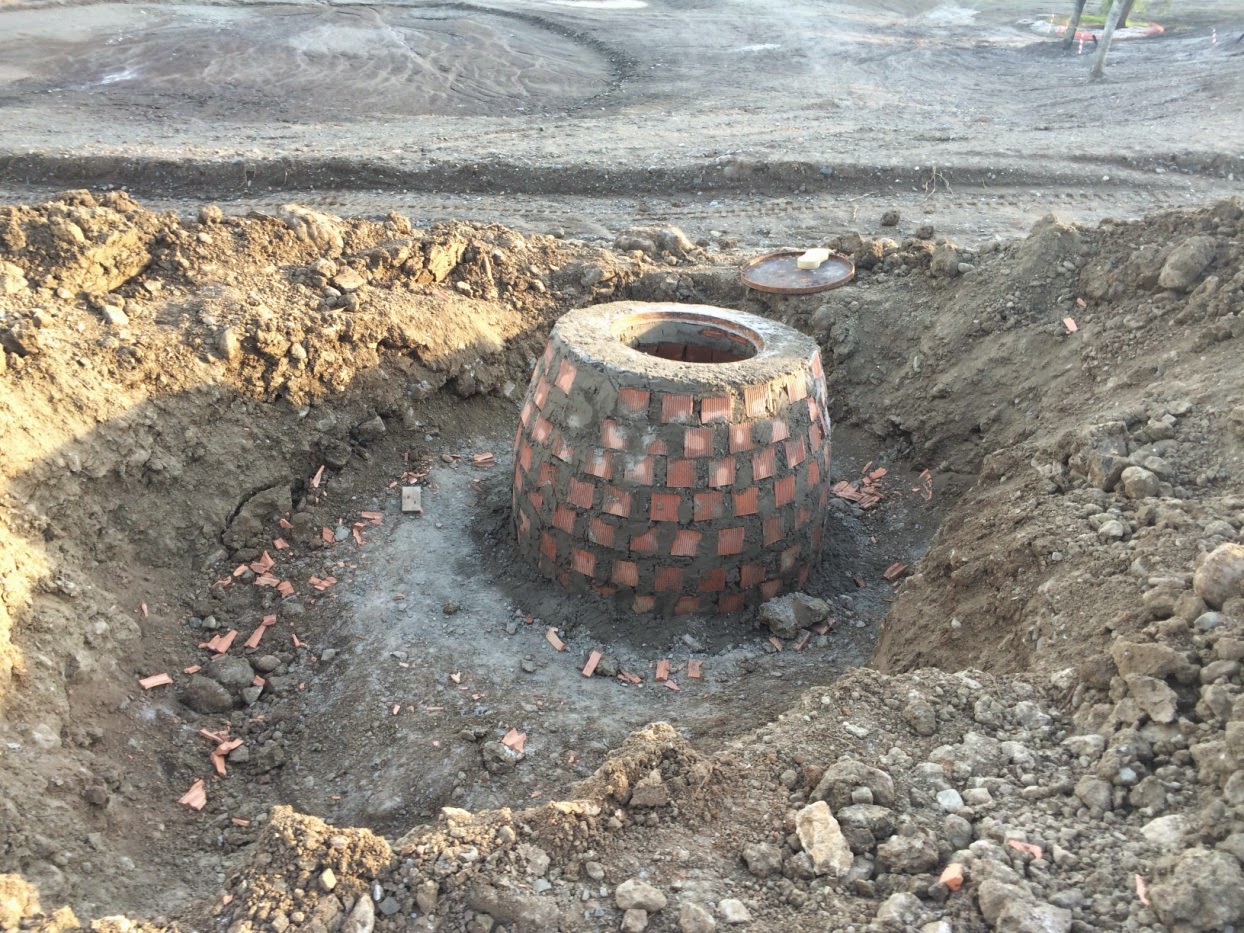 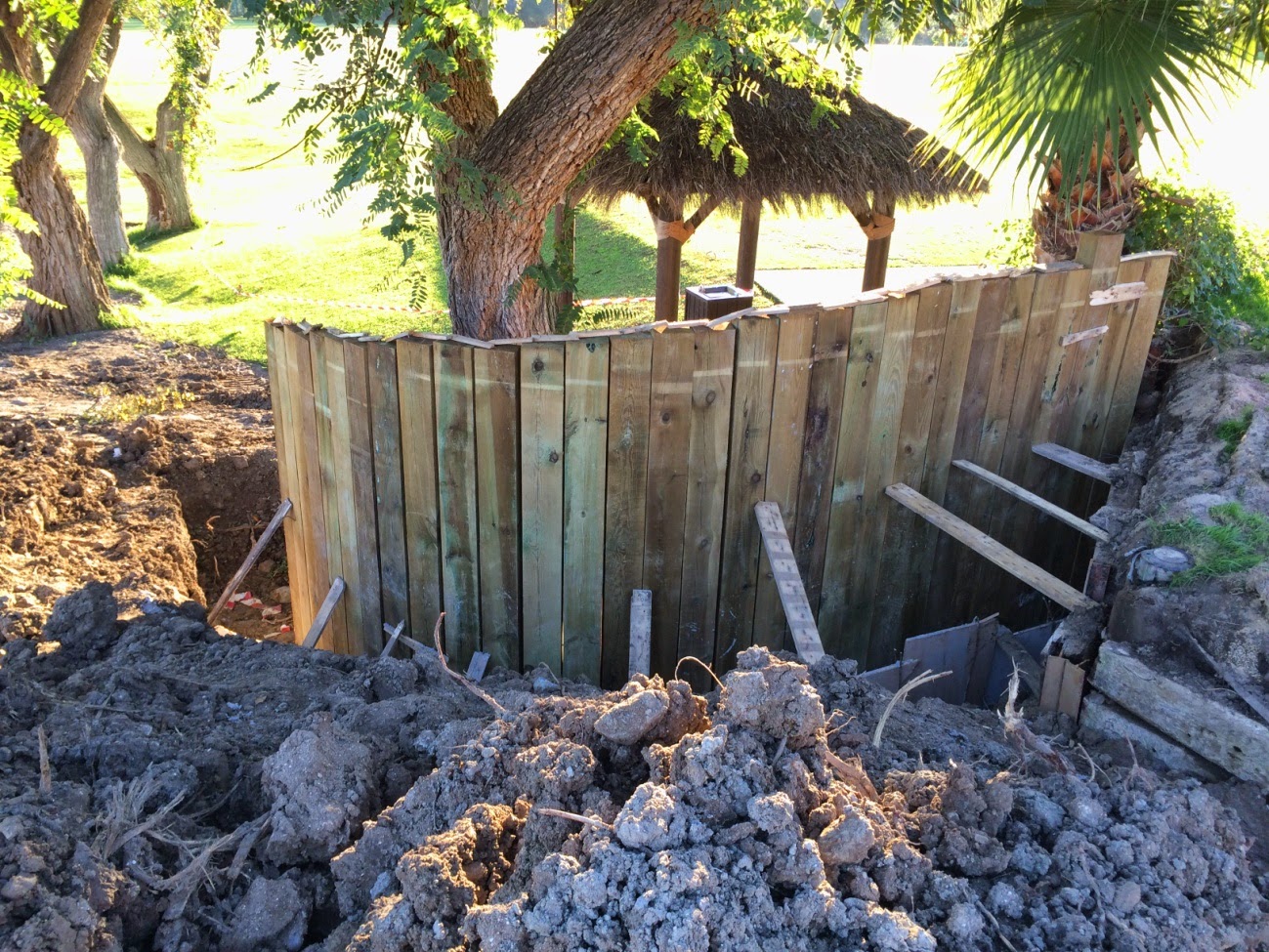 The charts in this chapter show the evolution of the different construction works included in this project. It shows the progress of the different works grouped in chapters compared with the schedule initially foreseen. It shows also the percentage of work already executed at any given certification date and the delay or advancement attached to them.
The chart below shows the amount of work executed by the 1st of December. Work completion is advanced in chapters such as demolition, stripping, earth moving, replanting and works on lake 15.
Bridge construction is behind schedule. Initially it was deferred for 2 months because of the work permit required. The rain caused a further delay, being their construction foreseen for the 9th of December.
The drainage works are behind schedule and subject to prior approval by Kyle Phillips of the elements shaped and modified by the shaper, i.e., mainly greens, bunkers, tees and lower water collection spots at holes 10, 11, 15 and 16. The works will commence as soon as the approval is received at both the lower water collection spots and the noble elements that are finished, such as tees and greens. 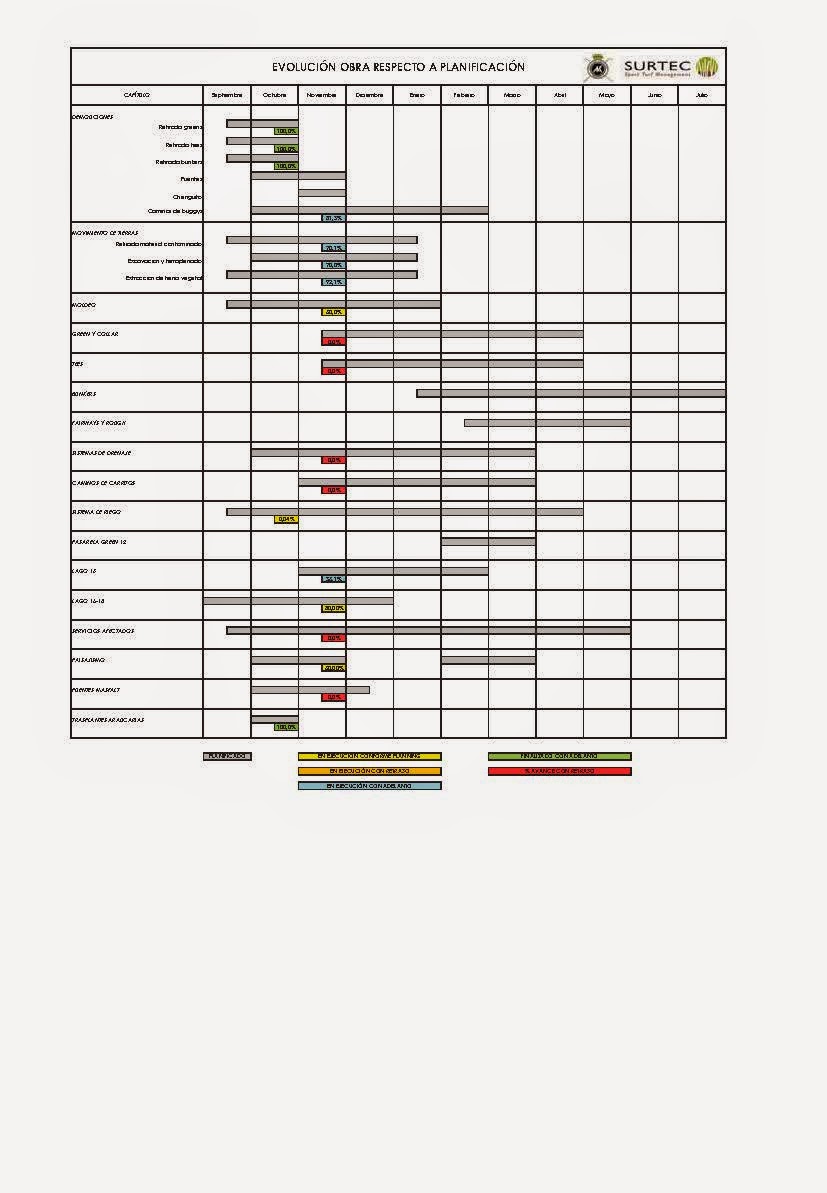